Grek Posts: 53Member ✭✭✭
May 2019 edited May 2019 in Roleplay
The Celestine Ascendancy has recently established the Special Investigations Section for the Angel Ascension Agency, an RP-focused department with the duty to "neutralize hostile influences that threaten the well-being of local residents and limit effectiveness of Angel Relief Office efforts in dangerous areas of the Ascendancy, especially areas with lowered or no law enforcement presence, and areas with limited governmental presence due to disasters or emergencies."
The first SIS operation, PEARL THUNDER is detailed below.
RUNNER: Grek
OFFICE: SIS
DESCRIPTION: A Krel trafficking ring has been discovered, feeding victims to
the torture harems of D'harven VI. Their local representative has already been
quietly arrested and has informed us of the next scheduled slave dropoff. We
hope to use this opportunity to insert SIS volunteers into the slave
processing facility, giving them the opportunity to secure the site, free any
prisoners and capture the Krel agents operating there for further
interrogation.
NOTES: Freeform diceless RP event. Some graphic content - torture, slavery,
aliens being shot.

Present was Grek (GM), Vaxis, Juno, Revelin (briefly!), Kitrana and special guest Keinna (who isn't a Celestine, but who volunteered regardless). 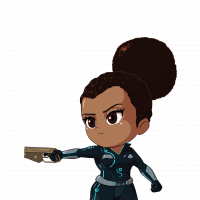