Shuttle transit has too many similar-looking layers.

gravithicc
December 2019 in Feedback
As a new player I was frustrated by the the confusing shuttle network. All the shuttles (and stations) looked and felt the same, and moving from one homeworld to another felt needlessly complicated. I just brushed it off and thought, "That's how the game is built, it's far too mature to change now." But with the recent Winterflame event that has you checking many homeworlds back-to-back, the shuttle system has gone from minor annoyance to primary roadblock in my hunt to find SS IronBeard.
Problems:
- Too many layers. You take 3 shuttles going from a planet surface to Omni station, and then 3 more shuttles to get to a planet near a different faction.
- The planetary stations all look alike. I know this will improve with time, so I'm not stressing out about it too much. It does make planetary stations seem like generic buffer areas, and makes them feel unnecessary thematically.
- The planetary stations use the same room for both planetary shuttles and faction-bound shuttles, which (I know it will sound silly) makes me forget sometimes which direction I'm shuttling to, especially if I look or tab away while the shuttle process completes. "Did I just come from the faction station or from the planet surface?
- The shuttles themselves all look and feel the same. Not a big problem to be honest, and I'm sure in the future there will be some variation to look and feel. Currently, though, it adds to the sleep-inducing tedium.
Possible Solutions:
- Making the planetary stations and planetary shuttles more unique: Many of the planet areas already have well built spaceport areas, some are nearly 20 rooms in size. Part of those spaceport areas can be moved to the orbiting planetary station to give it that racial uniqueness that planets already have.
If the planetary station is built by the same person as the planet surface, this opens up creative alternatives to the planetary shuttle: A customized shuttle experience to the planet's surface, maybe even omitting the shuttle on some planets and using a high-powered teleportion station or a big scenic lift travelling along a space station's tether to its planet. Heck, this could open up the ability to WALK TO between station and planet. Additionally, new players get to see racially themed content faster, because the station itself is (probably) built by the people on the planet below.
Of course if the planetary station is hand-built, then faction station shuttles could be placed in a different room, separate from transports to the planet's surface. This way you always know where you came from. If you are in the shuttle bay for the faction station, you know you came from there.

- Reducing layers in the shuttle system: One basic addition, please consider adding direct shuttles to and from each of the big 5 stations: Omni, Reynolds, Danica, Celestine, Iota. During peacetime, shuttle transit would be far more convenient, and during wartime, factions could disable shuttles from certain other factions.
Here is a visual aid that vaguely represents the requested Quality of Life alterations: 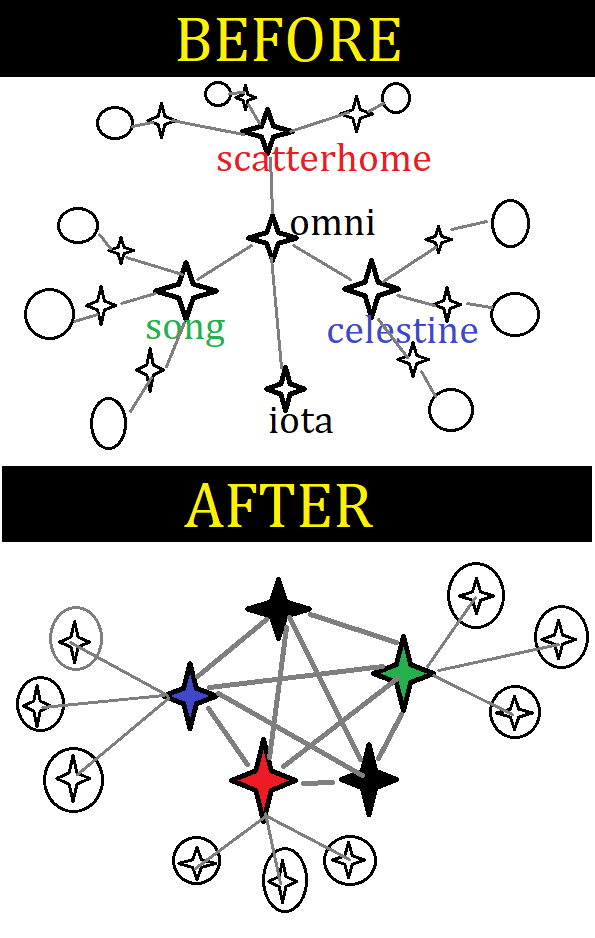