We have a ton of new features for you in this first release of Mudlet in 2019: secure connections, easier mapping for many games, support for HiDPI and more! This is the biggest Mudlet update since 3.0 in recent years.

Tick the Secure box to enable it. Enabling it will protect your connection to the game from eavesdropping (say, if you’re using a public WiFi), prevent anyone from tampering with it, as well as ensure that you really are connected to the game you think you’re connected.

Note that just like the browser’s green lock, this requires the game to support it as well. There aren’t that many games that currently do, but we hope that with a major client now TLS-enabled, more games will start to be.

If you’re a game admin, see here on how to enable it for your game so Mudlet users can connect securely!

Credit to jerzerisz and Vadi2 for adding this feature.

Easier mapping for many games

So many games out there are really unique in how their in-game geography works. That is why Mudlet’s approach to a mapper view, mapping, and speedwalking has been to provide “do-it-yourself” Lua functionality to enable players to add mapper support for their game. Many have!

However, to make it easier for non-coding wizards to get Mudlet’s mapper to work for their game, we outlined in our 2018 roadmap that we’d like to improve on this. 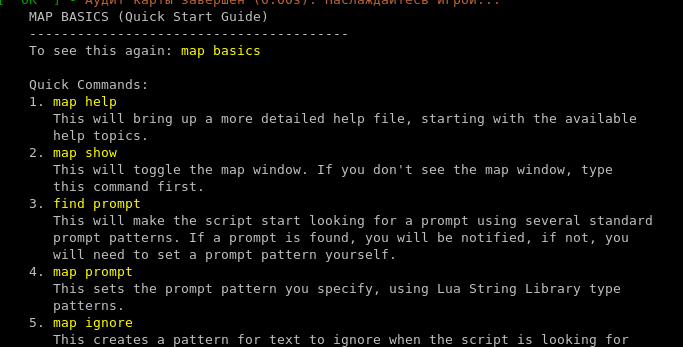 To this end, Jor’Mox has been super awesome in contributing his Generic Mapping Script to Mudlet and upgrading its functionality! The mapping script has been honed and configured for as many games as possible out of the box.

While configuring it, we’ve also discovered that games out there have a never-ending imagination on how to represent rooms, walking, and the general geography – so the script is not guaranteed for every game out there. It is, however, possible to configure it to your game and we invite you to our super-helpful Discord for assistance with this!

The new mapping script is automatically installed by default on new profiles.

Mudlet now supports high-resolution (Retina/HiDPI) displays! Compare the before and after screenshots of just how much sharper fonts now look.

Before – fonts not sharp on 2K & 4K displays

After – fonts are now sharp

Big thanks to Paul Saindon from Imperian for adding this long-awaited feature.

In addition to the HiDPI support, we’ve also started refreshing Mudlet’s icons! The new look works great on high-resolution displays and we’ll have more icons sporting the new look in the next update. Big thanks to Paul Saindon from Imperian, and Leris and SlySven from Mudlet for upgrading them. 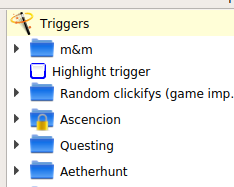 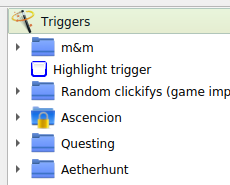 Mudlets color pattern triggers were limited to just the standard 16 ANSI colors previously – no more. Thanks to SlySven’s work in this area, you can now trigger on all 256 colors.

Additionally, you can now choose to trigger on only foreground or only background color, instead of having to pick both as before.

Keneanung added an awesome bot to help Mudlets development: When you submit a pull request with your improvements, the bot will pop-up with links to download a test version of Mudlet after the CI build is done:

A lot of new functionality added for those who love to code in Mudlet!

Features exciting for game admins this release are:

And lastly, big thanks to all of the members in our Discord community for helping newbies, especially Eraene, Leris, keneanung, and SlySven! 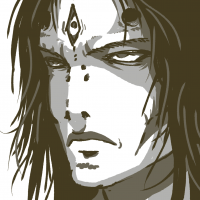 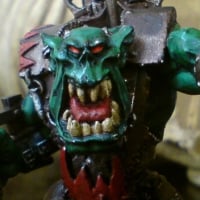